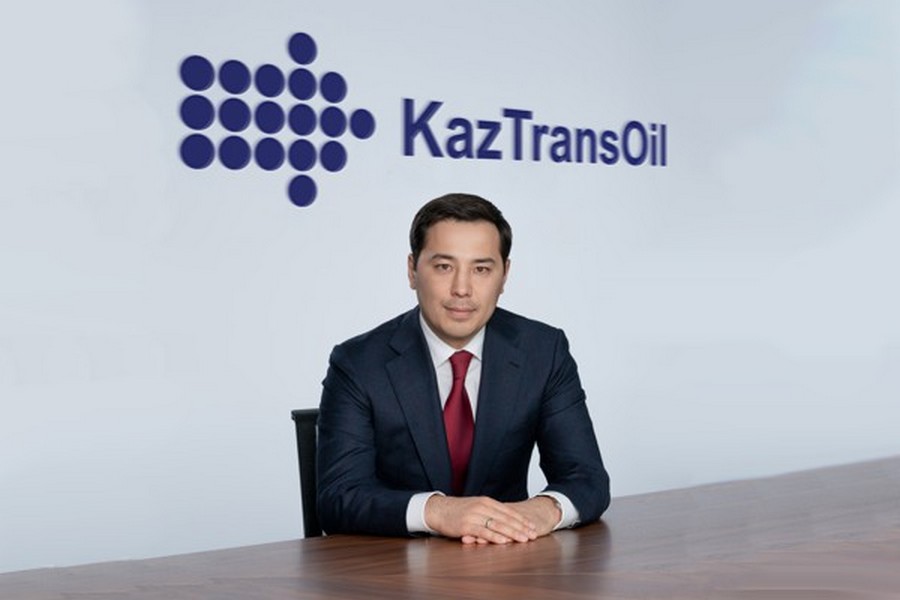 The coronavirus pandemic made adjustments to activities of companies worldwide. Kazakhstan’s enterprises, including the key oil industry, are no exception. Dimash DOSANOV, general director of JSC KazTransOil, talked in an interview with Interfax-Kazakhstan how the main oil pipeline national operator coped with the COVID-19 pandemic, while maintaining good financial and performance indicators.

- Dimash Gabitovich, the year 2020 proved to be a mixed one for many industries, including the oil and gas complex. How did the economic situation in the world affect the activities of the main oil pipeline national operator?

- Undoubtedly, the year 2020 adjusted the plans of many companies not only in Kazakhstan but all over the world. The pandemic affected the activities of the oil and gas industry, a decrease in demand for energy resources took place. In April last year Kazakhstan entered into the commitments under the OPEC + deal on a collective reduction in oil production, which is aimed at restoring the balance of supply and demand, as well as oil prices. Taking into account the current situation the company beefed up its resources and directed them towards fulfilling the key objective – ensuring uninterrupted and safe oil transportation.

In addition, we made every effort to prevent the spread of COVID-19 between the company’s and contractors’s employees. For that, the Crisis Management Team was created, its decisions were aimed at ensuring the stable operation of production facilities. Thanks to the joint efforts and coherent work of our shareholders, government bodies and contractors the optimal operating mode of production and logistics processes was organized. I would like to note high professionalism of our employees in the crisis situation, their strict observance of lockdown measures. We were jointly able to localize the impact of the pandemic and met our 2020 goals and targets as evidenced by the final results of our performance.

- How do you assess last year’s results?

- Financial indicators showed positive dynamics: the company’s consolidated net profit increased by 24% compared with 2019 to near 56 billion tenge (427.83 tenge / $1). The increase is mainly due to a decrease in expenses related to the depreciation of assets of subsidiaries of KazTransOil JSC after revaluation in 2019. The positive dynamics of financial indicators are also the result of a 15% increase in tariffs for oil pumping for export , an increase in income from forex rate differences.

If to speak about performance indicators then a slight drop took place in this area, the volume transported separately through KazTransOil’s main oil pipelines decreased 5% compared with 2019. This occurred due to a natural reduction in oil production at mature fields, as well as traditional fields of the Kumkol and Aktobe groups. In addition, the decline in production as part of the OPEC + deal contributed hereto as well

KazTransOil is the main oil pipeline national operator. The strategic objective of ensuring the country's energy security through stable transportation of energy resources is set before us.

Amid the pandemic production objectives on the reconstruction, replacement of pipelines, and repairs to the tank farm were achieved . The 2020 capital investment program was 95% fulfilled. Such a high figure was achieved despite the closed borders and as a result, difficulties with the supply of specialist machinery and equipment. Upgrade and repairs to production facilities is an integral part of the company's activities. If to speak about numbers, in the past five years KazTransOil has invested nearly 228.5 billion tenge for thise purposes. In 2021 capital investments will increase by 15% to near 54 billion tenge compared to 2020. These investments will be directed towards maintaining current production operations and securing reliable and safe oil transportation.

The company annually conducts a survey to understand how satisfied our customers with the quality of services provided are. As the consumer survey showed, the satisfaction rate reached 100%. This is the level which we always strive for as it reflects the stability and reliability of the company’s activities.

The company's strong operational and financial achievements in 2020 were recognized by the international rating agency Fitch Ratings, which affirmed the long-term foreign currency rating at BBB- with the stable outlook. According to the agency, KazTransOil maintains a dominant position in the oil transportation sector in Kazakhstan, which is strategically important for the country's economy. The company is not directly exposed to fluctuations in oil prices, something, what is a favorable factor for its business profile.

- Probably, the tariff proceeds, among other things, provided support for the company during the crisis period? Last year the tariff for oil pumping for export was increased.

- The tariff increase is one of the measures to ensure the efficient, reliable and safe operation of the oil main pipeline system. Practically 50% of all proceeds from the main activities of the company are income obtained from oil transportation for export. It should be noted that in recent years there has been a decrease in oil exports through KazTransOil’s main oil pipelines . The reason for the reduction in freight turnover was the natural depletion of mature fields, reorientation of Kazakh oil from exports to the country's domestic market, as well as restrictions under the OPEC + deal. The tariff was revised given these circumstances. The growth was 26.5% compared to 2019 while cumulative inflation reached 57% over this period.

- What amount will be used to pay dividends for last year?

- Since 2013 as a pioneer of the People's IPO the company has paid out 425.7 billion tenge to its shareholders. The average annual dividend yield with regard to the placement prices for 9 years is almost 17%. In 2021 the rise in dividend payments neared 12% compared with last year.

When preparing a proposal on the dividend size, the Board of Directors is guided by the main provisions of KazTransOil's dividend policy, according to which the amount allocated for the payment of dividends makes up at least 40% of the company's net income. Not only the net income actual amount but also the indicators of solvency and financial stability, the need for financing the investment program and other factors are taken into account. Currently taking into account external risks, it is important for the company to maintain financial stability. Realizing this the Board of Directors recommended that 50.77 billion tenge be allocated for dividend payouts. The dividend size for 2020 makes up 132 tenge per KazTransOil’s ordinary share.

- What investment priorities have been outlined before KazTransOil?

- We continue to work on the construction of Kazakhstan-China main pipeline system. This is a strategically important project for both KazTransOil and Kazakhstan. Our goal is to create a technical feasibility for supplying West Kazakhstan’s oil to Pavlodar Petrochemical Plant LLP and PetroKazakhstan Oil Products LLP [Shymkent oil refinery], as well as for export to China, Uzbekistan. This guarantees energy security for Kazakhstan. Within the framework of the project, in 2020 the first start-up reversal facility of the Kenkiyak-Atyrau oil pipeline was put into operation, the mechanical completion of the Aman oil pumping station was done as part of the second start-up facility.

The second important project is the reconstruction and expansion of the Astrakhan-Mangyshlak main water pipeline. It has social nature and is under control of the president of the country. In Atyrau and Mangistau regions the volume of water consumption is growing. The water pipeline is worn out and in fact cannot meet the existing water demand of the regions. The systematic project implementation will ensure the reliable operation and doubling throughput capacity of the water pipline in the next few years. Currently as part of the execution of the president’s instruction our subsidiary company Magistralny Vodovod has begun to develop a design and estimates for the reconstruction and expansion of the Astrakhan-Mangyshlak main water pipeline. Our objective is together with local executive authrorities to satisfy the need for water not only for production facilities, but also for the populations of the regions.

- What was the reason for the early development of the company's strategy until 2028?

- The company's development strategy until 2025 was approved in 2016. The innovative development of the oil main pipeline system and its integration into the global energy system are the national operator’s objectives , which could be achieved by applying global technologies to the production process. A program for the development of digital technologies is being implemented in KazTransOil. Taking into account modern realities, in the age of digitalization and the rapid growth of technologies, we, as a national operator, must track the emergence of advanced technologies and timely implement them across all stages of the company's activities. Digitalization and the desire to improve is the distinctive feature of progressive companies. In line with trends KazTransOil has already introduced a number of technological solutions in the past few years. The company's strategy is based on the plans of the main shareholder - KazMunayGas , the Energy Ministry, which regulates the activities of oil and gas companies, the volumes of oil production and transportation.

At the same time, currently the oil industry is represented mainly by mature fields, which are significantly depleted, namely these factors affect naturally the volumes of oil production and pumping. Taking into account the change in the development strategy of our major shareholder, JSC National Company KazMunayGas, as well as the fulfillment by the company of most of [its] key tasks the necessity arose to update them.

- What significant projects, noted in the previous strategy, have been implemented?

- Since the approval of the company's development strategy significant projects have been adopted for implementation. For example, Russian oil transit has increased to 10 million tonnes a year, separate pumping "low-sulfur" en route Atyrau-Samara-Novorossiysk has been launched in the amount of up to 1 million tonnes a year. A long-term agreement has been concluded on maintenance services for the oil pipeline system of JSC Caspian Pipeline Consortium-K in Kazakhstan. KazTransOil transferred the water supply service through the main pipeline to its subsidiary company - Magistralny Vodovod LLP. These projects are set out in the company's development strategy until 2028 alongside new goals and objectives. In order to implement them we will continue to cooperate with JSC National Wellbeing Fund Samruk-Kazyna, KazMunayGas, government agencies, and in particular, the Energy Ministry, partners, minority shareholders for the benefit of the development of sovereign Kazakhstan. In 2021, we will be celebrating the 30th anniversary of the country's independence. I am sure that together we will make a huge contribution to the strengthening of Kazakhstan's statehood.

The most important asset of KazTransOil is our team. Every employee deserves appreciation. It is strategically important to guarantee safe occupational conditions, fulfill social obligations, invest in the knowledge and skills of employees and create jobs for a new generation of oil pipelines maintenance workers.


June, 2021
© 2022 Interfax-Kazakhstan news agency
Copying and use of these materials without reference to the source is prohibited