Head of the Snow Leopard Foundation Erjan ERKINBAYEV:
KAZAKHSTAN HAS EVERY CHANCE TO BECOME THE COORDINATOR OF THE WORLD’S MOVEMENT TO PRESERVE SNOW LEOPARDS 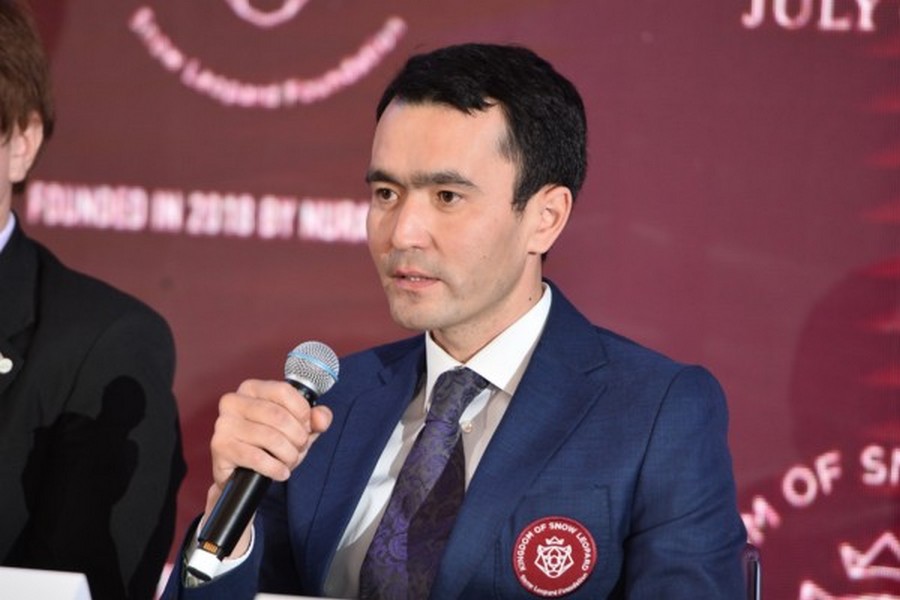 Kazakhstan is inhabited by about 130-150 snow leopards, according to scientists’ preliminary estimates. Experts are confident that it’s possible not only to preserve these rare animals’ number but also to increase it. Director of the Snow Leopard Foundation Erjan ERKINBAYEV talked in an interview with Interfax-Kazakhstan about what kind of work in our country is under way in order to preserve the snow leopard population.

- A year ago the snow leopard conservation fund Snow Leopard Foundation was established in Kazakhstan. What objectives has the entity set for this period, what successes has it managed to achieve over this time?

- The Foundation collected and accumulated charitable contributions, which have been used throughout the year to purchase a necessary outfit for a team of researchers, technical devices, camera traps, which have spotted not only adult snow leopards, but also kittens. And this has been good news for us because it means that the population is recovering. I want to note that our team includes hereditary zoologists – snow leopard researchers, specialists from the Institute of Zoology of Kazakhstan’s Ministry of Education and Science , who have built up an excellent base for studying the snow leopard, but insufficient funding in recent years has not allow them to continue to work as required . After the foundation was established, the work became more active, and dressing the scientists in the suitable uniform and equipping them with everything necessary to conduct the monitoring survey of the Almaty region was our top priority achievement we have fulfilled. Our researchers walked through all the gorges of the Trans-Ili Alatau Range and set up camera traps. In the winter they were relocated, they studied the snow leopard traces, collected waste products for genetic analysis. We plan to continue this work constantly in order to find out exactly what the snow leopards’ number is in Kazakhstan is. According to the current preliminary estimates, there are 130-150 animals. We are sure that it is possible to protect and preserve each leopard, and even increase the number of these rare animals, which are a symbol of our country.

- Worldwide only 12 countries are inhabited by snow leopards. Tell [us] about cooperation as part of the snow leopard population conservation.

- The work on the snow leopard conservation is conducted in each of the 12 countries, but someone has more opportunities, someone has less. Each country has its own specifics, for example, the largest headcount (2,000 snow leopards) in China; for comparison: about 200 in Russia, 500 in Mongolia. Ideally, all of the 12 countries should team up to work together to preserve the snow leopard population. At a minimum, our goal is to work closely with our neighbors: China, Kyrgyzstan, Russia and Tajikistan. We have the snow leopard common migration area and cooperation is not only desirable but necessary.

- Are joint projects planned as part of cross-border cooperation?

- Yes, the creation of a single information center with artificial intelligence was initiated, where a snow leopard life database will be set up. Creating a modern information center will help bring together all photos, migration routes, track each animal, offspring, bring together the genetic research results, photos from camera traps. Snow leopards move from country to country, and to date there is some data distortion as we can consider this or that specific animal our own, while Russia considers it its own, when it enters its territory. That is why the global snow leopard population is still very approximate, but if we put together all data into a single information center, we will be able to get more correct figures.

- It is known that you also plan to create a genetic laboratory. Talk this project through.

- For various monitoring studies, including for determining the snow leopard physiological state, the animal's wool and waste products are collected. Now the difficulty is that we send the entire biomaterial to Moscow or to the foreign countries, and this delays the process, and some materials lose their properties. It will possibly be difficult for each country to build its genetic laboratory where the snow leopard inhabits, and by and large it is not necessary. But it is quite realistic for four countries to create one modern and high-tech genetic laboratory. If to choose Almaty as its location then it will be convenient for everyone. As our experience has shown it is not so difficult to collect all material from across Almaty region. But in order to assign an animal ID number, name and passport, it is necessary to clearly know its age, where it inhabits, where it moves around, its state of health. And to determine all this, genetic studies are needed almost on a daily basis, so our plans include our own genetic laboratory project.

- Is it possible to say that a genetic laboratory will be in any case in Kazakhstan?

- For the time being the project is under discussion, at the level of an idea, which everyone is unanimously voting for. Naturally, its implementation requires funds, but I hope that they will be found. We want Kazakhstan to become the center for creating a single information platform, creating a single genetic laboratory and the Foundation will continue to work on that.

- How is the snow leopard ID passport drawn up?

- We set ourselves the objective of identifying each leopard, which inhabits the Tien-Shan Mountains within our country. In the Left Talgar Gorge - this is just above Shymbulak - our researcher photographed a female snow leopard with kittens. After that, she was assigned an ID-passport containing such data as gender, age, health, and other biological indicators. She was named Dana. We expect that over time, all 130-150 snow leopards will have their ID-passports and names.

- How long does one snow leopard identification take?

- In India, there is artificial intelligence that automatically identifies tiger patterns. For the time being we have been doing work on identification, so to speak, manually. We divide a photo into segments and describe each pattern. Our scientists take about a month to do this work, provided that there are several images of animals of good quality and from various angles they succeeded in following it and take biological material. This is quite long while the whole process can take two hours given laboratory studies. Ideally, all work should be computerized and we should reach that.

- Many experts agree that it is necessary to involve locals with the snow leopard protection. Is it possible to introduce this method in our country?

- The world practice shows that this is one of the most effective methods. We also had a case when we set up camera traps and one of the locals, who is well-versed in the mountains, removed one trap and took it away. At the same time, he got "caught" on three other camera traps and it took us only a few hours to find him without the police involvement. When he returned the device we agreed to cooperate with him and this is already bearing fruit. There is a similar situation with hunters from among the locals. If to say "you have a snow leopard in the neighborhood, and we will pay you, but you have to keep the animal safe, put down information about it in a log, maintain camera traps, and so on," then this person will be interested in getting paid a salary practically without leaving home.

-The Foundation sets itself large-scale objectives for the future. Do we have enough experts in this field to fulfill all the plans?

- Having survived difficult years after the collapse of the Soviet Union and being completely left for a while without attention and funding nevertheless Kazakhstan’s science managed to retain human resources. These are people who receive small salaries but are very dedicated to their cause and sincerely keen on it. There is an excellent make-up of experts at the Institute of Zoology, although the Institute building has long been in need of renovation. I think that in time we will manage to strengthen its material base, but the most important thing is that there are competent staff, who make every effort to preserve and revive the snow leopard.

- In early July, in the Kazakh capital Nur-Sultan, the first global conference was held dedicated to the problems of the snow leopard population conservation. The representatives of 12 countries, which are inhabited by the snow leopard, gathered to discuss the issues. Talk through the outcome of this meeting.

- First and foremost, the countries agreed on cross-border cooperation. This is a big achievement. Also, I think that no one is against the idea so that creating a single information center and a genetic laboratory comes true here on our soil. On the margins of the conference a proposal was voiced by one of the distinguished members of the Global Snow Leopard and Ecosystem Protection Program (GSLEP) that our country should become the leader and coordinator of the world movement for the snow leopard preservation. It is also a big success, which suggests that experts recognize Kazakhstan as a stable country and a safe platform. And the last thing - for us, as for the foundation, a big achievement was that we agreed with colleagues from the other countries to hold similar events annually, and I am sure that this will allow us to act more cohesively and achieve better results.


July, 2019
© 2020 Interfax-Kazakhstan news agency
Copying and use of these materials without reference to the source is prohibited