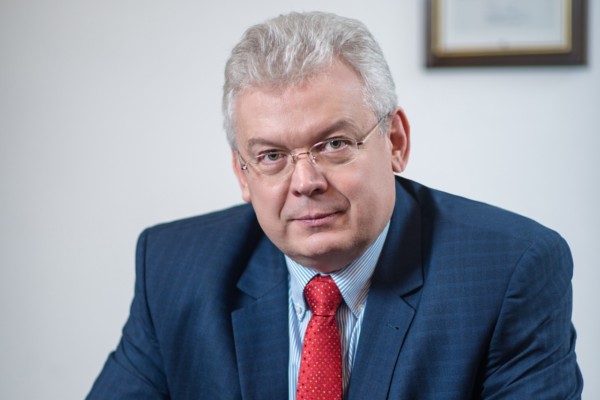 The feasibility of developing nuclear power in the country has long been discussed in Kazakhstan. The latest round of discussion is under way in the light of neighboring Uzbekistan’s recent decision to build the first nuclear power plant. Deputy Director of Kazakhstan's Scientific and Technical Center for Nuclear Technology Safety Oleg ROMANENKO talked in an interview with Interfax-Kazakhstan about the trends in the "peaceful atom" market, as well as whether Kazakhstan needs nuclear power and why Uzbekistan made up its mind in favor of the nuclear power plant.

- Oleg Gennadievich, tell us about current trends in the global nuclear energy market. For which reasons are countries interested in building nuclear power plants?

- According to the World Nuclear Association, 56 power units of nuclear power plants are currently under construction across over a dozen countries worldwide. Such countries as the United Arab Emirates (UAE), Bangladesh, Belarus, and Turkey are at the construction stage of the first nuclear power plant and such countries as Uzbekistan, Saudi Arabia, Egypt, Indonesia, Nigeria and Ghana declared their intention to develop nuclear energy. All the countries, which count on nuclear generation, have different goals. But, basically, this is a shortage of electricity, a desire to diversify their economy and attract new technologies to the country.

- How is the growing demand for nuclear energy explained, including in the countries with huge hydrocarbon reserves?

- Let's take as an example, say, Saudi Arabia and the UAE – the countries with solid oil reserves. The UAE has already built one unit and Saudi Arabia has outlined its intention to develop nuclear energy and announced a tender for the nuclear power plant construction. Seemingly why, if there are lots of hydrocarbons in these countries? Actually, the standard of living of the population in these countries is rising, and no one wants it to stop. Simultaneously electricity consumption levels are growing. In Saudi Arabia, electricity is mainly needed for seawater desalination and the needs of the general population who want to feel comfortable in hot climate and use air conditioners en mass. In the UAE, the country’s rapid development and its aspiration for innovation and technology add up to that. Currently, all energy needs in these countries are satisfied with oil and gas. But to burn natural gas is the same as currency burning because it is much more profitable not to burn but to sell it. As for oil, now the whole economy of the very Saudi Arabia is built on servicing oil production. Thus, the country's economy very much depends on world oil prices, and after a relatively recent fall in world prices the country found itself in a very difficult economic situation. Therefore, they want to diversify the economy and the nuclear power plant can really make a difference to this end.

- Our neighbor, Uzbekistan, has recently officially announced the launch of a project to build a nuclear power plant. In your opinion, for what reasons, having significant potential for the development of the very solar energy, gas reserves, did the country make up its mind in favor of nuclear power generation?

- Uzbekistan also wants to diversify its economy, wants to develop industrially and attract new technologies. When the nuclear power plant construction begins in the country, it will give an impetus to the development and modernization of industry and improvements to the standard of living of the population. New jobs will emerge, a process of training specialists in the energy industry and related industries will be launched. In addition, as practice shows, the presence of nuclear power plants gives an impetus to the development of nuclear science and all related fields of science.

- Why on earth is preference given to nuclear power plants but not to renewable energy sources (RES) relevant currently amid climate change on the planet?

- Both Uzbekistan and Kazakhstan plan to develop RES, in particular, wind and solar energy, as our countries are parties to the Paris Agreement and should take steps to reduce CO2 emissions. But, firstly, this energy with low density, that is, to get solar or wind energy it’s necessary to build up solar panels or wind turbines across huge areas. Secondly, this is unstable generation which depends on weather conditions and the time of day. Experts in the field of energy claim that in order to integrate renewable energy sources into the common energy system, it is necessary to have for them 100% conventional generation sources back-up. Therefore, the issues of industrialization cannot be solved only through the development of RES.

I cannot present examples of industrialized countries, which would have become developed based on renewable energy sources. Basically, just all the countries possessing nuclear power plants are in the top thirty developed countries, where Kazakhstan is aiming for, and they found themselves in this TOP-30 mainly thanks to nuclear power. And having already achieved impressive results, they can afford to mull over the development of RES. Nuclear energy is some sort of compromise, which allows for a stable base for industrial development and at the same time compliance with environmental friendliness. After all, nuclear power plants also prevent CO2 emissions and, from this point of view, also belong to "green" energy.

The option of the development of nuclear power in our country suggests itself since a nuclear power plant operates in base load mode and provides stable base load capacity for the power system increasing its stability, and then in parallel it is possible to develop RES, where appropriate.

- The issue of nuclear technology safety has always been and remains most discussed. How has the world science advanced on the issues of safety of modern nuclear power plants? What safety standards are used in the construction of new plants and how do they differ from previous technologies?

- World science in the field of safety of nuclear technologies has advanced very much. For example, what options are we considering for Kazakhstan? And what now in general do those countries choose, which decide to build nuclear power plants, in particular Uzbekistan? No lower than generation 3+ reactors, which take into account all international safety requirements in accordance with the IAEA standards and are upgraded in order to meet “post-Fukushima” requirements compared with their predecessors.

The second requirement is that the power unit be licensed in the country of origin. And finally, the third important term is technology referentiality. It is desirable that this type of nuclear power plants be already existing and tested out in practice. For example, Uzbekistan has chosen a nuclear power plant of Russian model with two VVER-1200 reactors for the construction, which are already successfully operating in Russia. In addition, I stress that when people talk about "post-Fukushima" requirements, people most often do not take into account the fact that in Fukushima almost no one was directly affected by radiation, people died from tsunami direct and its consequences. However, the international requirements were tightened after the emergency in Japan. And modern 3+ power blocks have a multistage safety system, which is aimed at preventing radiation leakage in any forecast design and “beyond design”.

- How do you think are there any grounds to worry about Kazakhstan’s environment due to the construction of the nuclear power plant in the neighboring state?

- No, the operation of modern nuclear power plants does not harm the environment and does not allow the spread of radiation; otherwise they would not be so actively built around the world. Another thing is that there is such a thing as radio phobia. That is, the fear of radiation is unjustified at the current security level but quite common. And one should fight it through education telling people how reliably and thoughtfully modern nuclear power plant safety systems are made, which have multi-stage protection, are automated and do not even depend on the notorious human factor.

- We in Kazakhstan have outlined for themselves ambitious goals, which Nursultan Nazarbayev clearly formulated and put forward - to enter the world’s top 30 developed countries. And in order to achieve this goal, industrialization is necessary, and therefore the development of the energy sector. For a development breakthrough we lack high-tech competitive companies and investment. In addition, calculations show that even without this breakthrough, by 2030 we will face a shortage of electricity - about 2.7 GW, at least in the south of the country. How to tackle it? Since water resources in our country are very limited, we can burn traditional fossil energy sources (coal, gas, oil), something what we are doing now, but they pollute the environment, especially coal-fired power plants, and we have declared a commitment to a green economy. As for the development of RES, I already mentioned above - it is possible and even expedient in some regions, but as an addition to nuclear power plants and thermal power plants run on fossil energy resources but not as a self-sustaining response to the objectives set.

In addition, I believe that the nuclear power plant construction in the country can increase its investment attractiveness. In Kazakhstan, after the collapse of the USSR, we decided to minimize participation by the government in the energy market. This led to the fact that if an investor wants to build an energy-intensive production facility, he must first build a combined heat and power plant for himself, or create a different power generation [source]. First of all, this is not so profitable for investors since it will be difficult for them to produce competitive products with such an approach. And, secondly, from my point of view, we need to move over from a situation with such a free and liberal energy market to a situation when it will be managed more by the state. A nuclear power plant just implies more government involvement in the energy market provided that its construction will be carried out as a national project. That is, as it is the case in Belarus under Alexander Lukashenko’s supervision or in Uzbekistan, where the project is being implemented by the government under Shavkat Mirziyoyev’s personal supervision.

And one more important thing, in my opinion, that needs to be noted. We are not new arrivals at the atomic club - the famous BN-350 fast neutron reactor operated in Aktau for many years, thanks to which water was desalinated in the region, several research reactors are still in service in the country and in addition, there is also uranium production on the premises of JSC Ulba Metallurgical Plant in Ust-Kamenogorsk. At the same time, our expertise in the nuclear industry is rapidly getting worse as experts get old, quit but practically there is no new staff. The nuclear power plant construction would be the renaissance for this industry and help to retain both the existing expertise, experts in the industry, and reach a new level and develop further. Therefore, if we lived somewhere in Hawaii, developed tourism only without thinking about industrialization, and enjoyed the excellent environment, then maybe we might afford to strongly doubt whether Kazakhstan needs a nuclear power plant. But given that what we inherited from the [Soviet] Union in combination with the goals for development that we set, the nuclear power plant construction for Kazakhstan is a very logical scenario. By the way, we are well aware of that, and therefore the work on studying the feasibility of developing nuclear power in the country is not stopping. And the fact that it has been continuing for many years just indicates that thoroughness with which we approach the study of this serious and responsible issue.


December, 2018
© 2020 Interfax-Kazakhstan news agency
Copying and use of these materials without reference to the source is prohibited